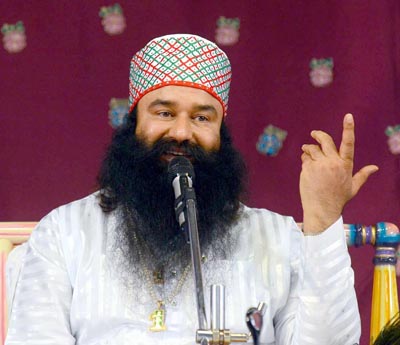 His Holiness Huzoor Pita Saint Dr. Gurmeet Ram Rahim Singh Ji Insan incarnated on Aug. 15, 1967 to the most revered father, Sardar Magghar Singh Ji and the most respected Mata Naseeb Kaur Ji, in the holy village SriGurusarmodia, district Sri Ganganagar, in the state of Rajasthan, in India. S. Magghar Singh Ji was a landlord and was the head of his village. Mata Naseeb Kaur is a dedicated devotee of the Lord.

Shah Mastana Ji in his last satsang (spiritual discourse) in January, 1960 had repeatedly said, “Exactly after seven years we will come again in the form of the third body (the Third Master). Sometimes people do not at once believe the words of saints, but when the said thing is proved true, then they realize its significance. Similarly, at that time no devotee could understand this statement of Shah Mastana Ji. It proved true and was realized when Huzoor Maharaj Saint Dr. Gurmeet Ram Rahim Singh Ji incarnated on 15th, August 1967, exactly after the completion of the said seven years.

His Holiness was the only child in his family. Thus His Holiness was the favourite of all and was loved by all. Deeds and activities of His Holiness from the very childhood illustrated that he was not an ordinary child. The respected parents also came to realize that their son was not a mere child but the very image of the Lord. Therefore, they never hurt him physically or verbally. The natives of the village also had come to know about the great soul. His Holiness, since childhood, was of a very kind and helping nature. His Holiness helped the poor and the needy financially and in every required way. These inborn qualities of His Holiness are a part of his personality today as well. His Holiness at the age of seven got Naam from Param Pita Shah Satnam Singh Ji at Dera Sacha Sauda, Sirsa on 31st, March 1974. In other words, one Master Saint found the other one. After getting Naam, His Holiness motivated his friends to get the same.Read More