Warning: Use of undefined constant REQUEST_URI - assumed 'REQUEST_URI' (this will throw an Error in a future version of PHP) in /var/www/au/wp-content/themes/enfold/functions.php on line 73
 May 2014 - Dera Sacha Sauda Australia 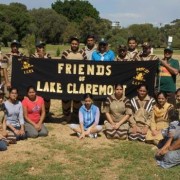 In the series of Dera Sacha Sauda’s Humanitarian Welfare programs which are running continuously, more and more activities keep on adding which not influence others but also people get inspired to follow and cooperate in each possible manner. The target is to counter the depreciation of flora and save the nature from global warming.

Latest live example is Tree Plantation Drive which was organized by the Lake Claremont & South Coast Care. It was an iconic opportunity for the Dera Sacha Sauda disciples in Perth to plant the saplings. The task was completed by the Holy Grace of the Revered Saint Gurmeet Ram Rahim Singh Ji Insan.

Around 30-35 Volunteers proactively played their major role with the spirit of high enthusiasm on the specific day to plant around 5200 saplings with the local community. Dera members were welcomed by the great energetic volunteers & Coordinator of Lake Claremont Heidi Hardisty (Australian Pride award winner) and the local member of council Bruce Hayens who showed great respect for Shah Satnam Singh Ji Green ‘S’ Welfare Force Wing volunteers, in his words.

At the end, the food (Langar) was served to one and all by Shah Satnam Singh Ji Green ‘S’ Welfare Force Wing volunteers to everyone for the plantation and a group photo was also taken by a volunteer after lunch.

It is worth mentioning that such kind of Tree Plantation drives have already been conducted by Dera followers in Australia (Perth) on April 5th, 2014 and May 17th, 2014 also. 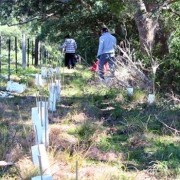 Dera Sacha Sauda followers and members of Shah Satnam Ji Green ‘S’ Welfare Force Wing organized a Tree Plantation Drive at Jamberoo, New South Wales in Sydney (Australia) on May 4, 2014. The plantation ceremony started at 10:00 am in pursuance of effort for greener tomorrow and it was successfully concluded at 12:00 am.
plantation drive in australia

A total of 780 saplings were planted by 35 volunteers. They materialized the venture of tree plantation with the objective of conveying the message of spreading greenery around and thereby reducing the effects of global warming. Every one of them showed great enthusiasm in planting trees which they know will prevent soil erosion and provide a green cover.

Abiding by the holy teachings of Revered Saint Gurmeet Ram Rahim Singh ji Insan, the volunteers not only planted the saplings but also ensured that they would take proper care of them to develop into grown up trees. The initiative emphasized the importance of keeping the surroundings green and raised awareness in the community about environmental issues.
tree plantation in australia

Everyone who observed the event appreciated the volunteers for their zealous efforts for this noble cause and paid gratitude towards Revered Guru Ji for initiating this humanitarian effort and infusing such an exquisite spirit in the hearts of volunteers towards social welfare.

Noteworthy, Dera Sacha Sauda carries out 102 humanitarian activities all over the world through its welfare force named as Shah Satnam Ji Green ‘S’ Welfare Force Wing which is well-acclaimed for social reformations across the globe. The organization has planted more than 21 millions saplings around the globe since 2009.