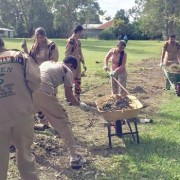 The International Chapter of this wing located at Australia, which is quite regular in its Tree Plantation Drives there, was asked for help by the local Council of Brisbane when Morayfield was flooded.

The Members of Shah Satnam Ji Green ‘S’ Welfare Force Wing located at Brisbane immediately responded to this call on 20th May, 2015, wherein they carried out all kinds of relief activities from 9.30am till 2.30pm.

Shah Satnam Ji Green ‘S’ Welfare force Wing, since its inception have been on forefront at any time of unfortunate calamities that calls for humanitarian needs. This Wing is also working against prevalent evils in Wing like feticide, drugs. Blood donation camps are a regular exercise by members of this Wing, it holds international recognitions for its enthusiasm to serve humanity. Members of this welfare force Wing indulge in activities like tree plantation, awareness rallies, motivating de-addiction, regular blood donation. Annual renewal and training is also conducted for members of this welfare force Wing.

The Council Officials had all appreciations for these Dedicated Volunteers for their Selfless Humanitarian Service, especially knowing that they do not expect anything in return. 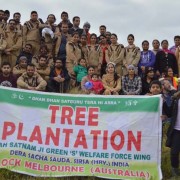 It’s truly remarkable to see these Volunteers working day and night towards Humanity and towards betterment of the Planet. Cleanliness Drives, Tree Plantations, Blood donations, Awareness Campaigns, Anti Drug Addiction, post humous donation of Eyes, body, Skin (for acid attack Victims, skin is stored in Skin bank and used for skin grafting) and even ashes (one of the campaign that encourages people to donate the left over ashes, containing bones of deceased on which trees are planted, which in turn provides calcium, magnesium and many such minerals to Plants and source of happiness for the deceased near and dear ones) are just some of the 111 Welfare works initiated by Dera Sacha Sauda and the Volunteers of this organization are leaving no stone unturned in this mission Humanity.

14th June 2015, Melbourne The Shah Satnam Ji Green ‘S’ Welfare Force Wing Volunteers had a really long day with 4 separate Welfare activities to complete in about the same time. But these Volunteers with the blessings of revered Saint Gurmeet Ram Rahim Singh Ji Insan are always waiting for an opportunity to be of some service to Humanity and such days are like a boon to these warriors of Humanity. The first Activity conducted this day, was a blood donation Camp at 51-65 Clarke street, Southbank in Melbourne city for Australian Red Cross Blood Services. The donation was started at 10 am by 20 volunteers, of which 9 Volunteers donated whole blood and 11 donated Plasma. Red Cross really appreciated the Volunteers for helping them in saving lives on regular basis. The Volunteers at Melbourne have donated approx. 483 units of blood in last few years. At the same time, the Volunteers had another tree plantation with Hume City council at the End Of Horne St, Campbellfield Victoria and the timing was 10 am to 2 pm. It was a special plantation organised by council on the name of Shah Satnam Ji Green ‘S’ Welfare Force Wing. 54 volunteers of Dera Sacha Sauda participated in the campaign and completed the plantation in just 1 and half hour. The Council head Melissa is so amazed at the speed of Volunteers, that she has given a new title to the Volunteers as ” A PLANTING MACHINE”. 1150 trees were planted in no time by the Volunteers. The Council was highly thankful for this great act by Shah Satnam Ji Green ‘S’ Welfare Force Wing Volunteers. At the same time around, 10 volunteers went to North Cumberland Rd, Pascoe vale to help Moreland Council with planting trees with a target of around 150 trees in 2 hrs and the Volunteers, the real Planting Machines finished it by 11:30 in just 1 and 1/2 hr.

Another team of 20 Shah Satnam Ji Green ‘S’ Welfare Force Wing Members went to 5 Mile Creek, end of government Rd, Essendon and planted 100 trees in just 1 hr. The friends of Moonee Ponds Creek said they had never received that much help from anyone, as provided by the Volunteers of Dera Sacha Sauda. For them, planting these 100 trees used to be a struggle, but now their views had changed and from next time, they will be targeting more trees as nothing is impossible when this Welfare Force is there. This site is hosted by nina Franceschi Eason. All the sites were served with the Langar (dainty) of Kadi and Rice was served to everyone at the end, and the local people expressed their heartfelt gratitute for food and providing humanitarian services to save lives and make World a better place. In all,1400 trees were planted by 84 volunteers and 20 units blood donated by 20 Volunteers on this day at around 4 different places. The Volunteers are really thankful to their Master Saint Gurmeet Ram Rahim Singh Ji Insan, for inspiring and motivating them to provide such humanitarian services, touching millions of lives.