Warning: Use of undefined constant REQUEST_URI - assumed 'REQUEST_URI' (this will throw an Error in a future version of PHP) in /var/www/au/wp-content/themes/enfold/functions.php on line 73
 June 2013 - Dera Sacha Sauda Australia 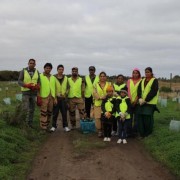 With the holy inspiration of our most adorable Guru Ji, Saint Gurmeet Ram Rahim Singh Ji Insan, the volunteers of Shah Satnam Ji Green ‘S’ Welfare Force are consistently working for the welfare of human beings across the globe. Under the series of 96 welfare activities initiated by Revered Guru Ji, the Shah Satnam Ji Green ‘S’ Welfare Force Wing of Adelaide (Australia) organized a Tree Plantation drive on June 02, 2013. During this drive, 1200 saplings were planted by 10 volunteers within 4 hours making it a milestone for others. The event aimed to save Earth by planting more tress which will in turn reduce the increasing Global Warming. The citizens who were witnessing it stood open-eyed and appreciated the incredible spirit and enthusiasm of volunteers to work for a humanitarian cause.
It is worth mentioning that the volunteers of Australia always lead in carrying the 96 welfare activities forward. They organize blood donation camps regularly for which they have been acknowledged many times by the authorities there.